Scottish News Website of the Year
It’s a seat on the bus rather than a seat on the plane for the England players this year.
Being able to play most of their Euro 2020 matches at Wembley will undoubtedly bring pressure as well as pleasure, especially with the return of fans.
England are traditionally dominant at home when it comes to competitive fixtures and — with a couple of notable exceptions (Euro 2008 being the most recent) — they tend to canter through major tournament qualifiers.
But they are not infallible. While the Three Lions have played 73 times at the new Wembley, they have failed to win on 20 occasions (11 draws, nine defeats).
The Scotland-England rivalry is also not as one-sided as sometimes portrayed. Of the 114 times the Auld Enemies have faced off, the statistics paint the picture of a fairly balanced conflict.
England hold the slight edge with 48 wins to Scotland’s 41, with 25 draws.
The last of those was, of course, as glorious a failure as it gets for the Scots as two late Leigh Griffiths free-kicks took Gordon Strachan’s men to the brink of victory in 2017 before Harry Kane’s even later leveller landed a sucker-punch felt across the nation.
Here, ahead of the Euro 2020 kick-off, we take a closer look at the Three Lions.
The Dark Blues travel south to take on the Auld Enemy at Wembley on Friday June 18 (8pm). The match will be screened live on ITV.
Earlier in the day, Croatia face off with the Czech Republic. That match kicks off at 5pm and is live on BBC One.
Well, he got there in the end.
Whether through genuine uncertainty or just chronic indecision, Gareth Southgate used every single second available to him before trimming his squad down to size.
Initially naming 33 players — some of whom, frankly, were never likely to make the final cut — Southgate eventually settled on his 26 on the June 1 deadline.
The biggest takeaway had been the inclusion of four right-backs: Reece James, Kieran Trippier, Kyle Walker and Trent Alexander-Arnold.
However, with Alexander-Arnold subsequently picking up a thigh injury in a friendly against Austria, the Liverpool full-back is now out of the tournament.
If Harry Maguire is fit, he starts at centre-back regardless of whether it’s three at the back or four. But his fitness, or lack thereof, may be what determines the formation to begin with.
Should Southgate revert to a three-man defence due to Maguire’s injury then the versatility of Walker and James in particular will be key.
Walker has played at centre-back almost as often as right-back under Southgate while James can also switch between the two.
Alongside Maguire in front of keeper Jordan Pickford is likely John Stones. The Manchester City defender’s return to form has been extraordinary and he has started all three England matches this year following a couple of years in the international wilderness.
(2/2)#ThreeLions #EURO2020 pic.twitter.com/vQ6NozjZPH
— Football on BT Sport (@btsportfootball) June 1, 2021

Ben Chilwell and Luke Shaw present two good, in-form options on the left, with Arsenal youngster Bukayo Saka capable of filling in there too.
In midfield, Mason Mount is a Southgate favourite and will surely start regardless of formation alongside Declan Rice and, if fit, the influential Jordan Henderson.
Borussia Dortmund youngster Jude Bellingham, meanwhile, is not just there to make up the numbers given his impressive debut season in the Bundesliga and Leeds’ Kalvin Phillips produced a stellar first season in the Premier League to earn his spot.
Up front, captain Harry Kane is coming off not only another Premier League golden boot win but also his most fruitful season in terms of creativity as well.
The Spurs attacker laid on 17 goals in all competitions while netting 33 of his own and is, as the Scots already know, the man most likely to land a killer blow on any given day.
That said, before his goals in back-to-back fixtures against Albania and Poland in March, Kane had gone six matches without netting for the national side. That kind of barren spell in the Euros would suit their Group D rivals just fine.
Elsewhere, Mason Greenwood ruled himself out due to an injury so back-up options for Kane through the middle are limited to Dominic Calvert-Lewin and, though he usually plays off the left, Marcus Rashford.
The Manchester United forward only just managed to reach double figures in the league this season but still topped 20 in all competitions in an almost 60-game campaign.

To complement Kane, Southgate has an array of creative talent at his disposal.
The England boss gave Raheem Sterling the captain’s armband against San Marino earlier this year while Jack Grealish and Phil Foden have earned plenty of plaudits for their domestic campaigns.
Jadon Sancho may have missed most of March and April due to injury but the Dortmund winger still put up raw numbers which trump all three of them.
Of the four, Sancho played the second fewest minutes (2,974 in 38 games; Grealish has fewest with 2,275 in 27 games) but scored joint-most goals (16, level with Foden) and was well clear in assists (20; Sterling and Grealish had 12 and Foden had 10). 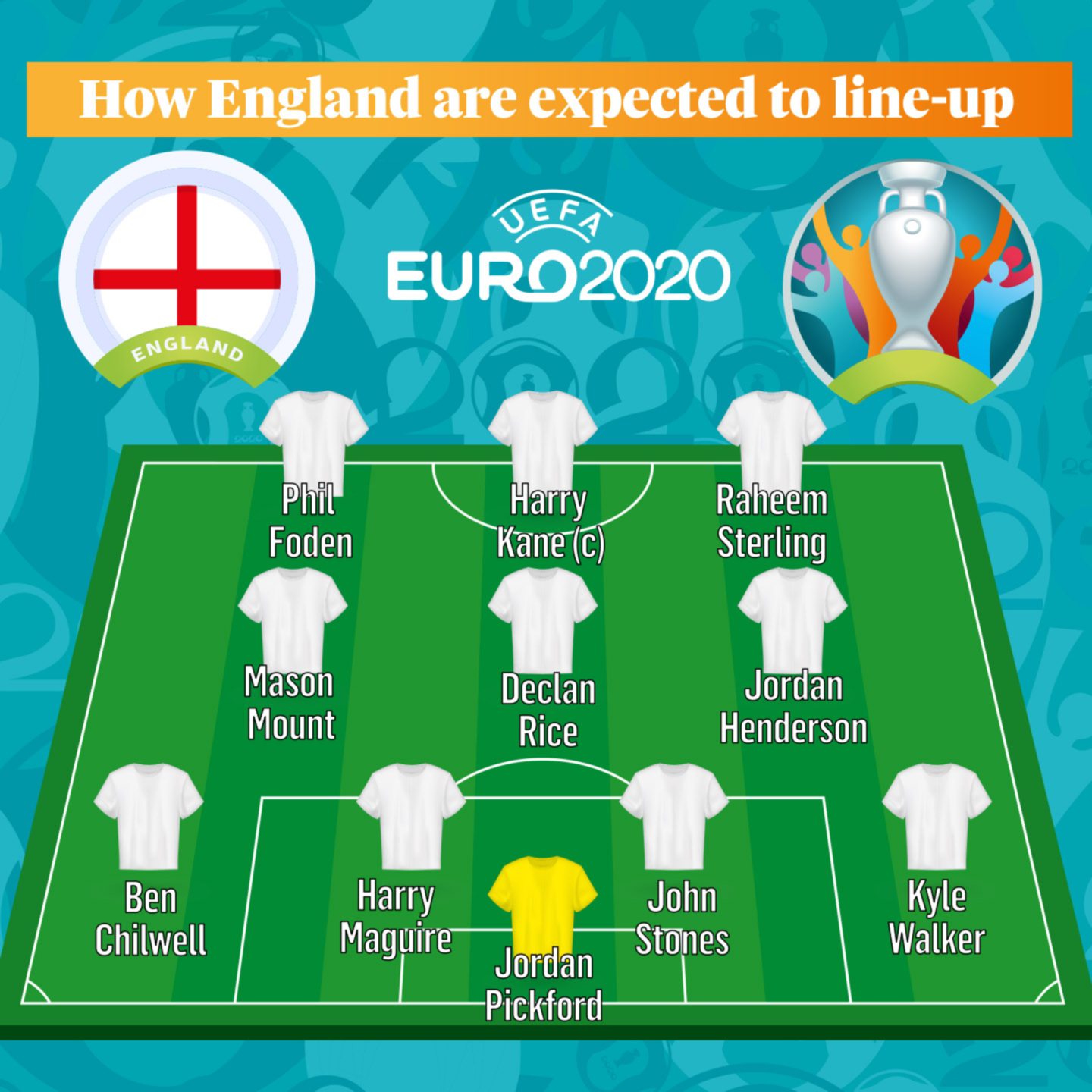 England’s Euro 2020 qualification was notable for pretty much one thing: their first qualifying loss in almost exactly 10 years.
Not since the October 10 2009 Euro 2012 tie against Ukraine had the Three Lions been tamed in a major tournament qualifier until Czech Republic came from behind to win 2-1 in Prague on October 11 2019.
That loss aside, they made typically short work of the rest of the matches and — while not quite the 10 out of 10 they secured in qualifying for Euro 2016 — seven wins from eight and 37 goals scored is a record bettered only by Italy and Belgium (both 10 out of 10 in a six-team group).

But an exemplary recent qualification record does not major contenders make. Despite their magnificent form, once tournaments roll round England tend to revert to their own form of glorious failure.
Indeed, the 2018 World Cup was the first time England made the last four of a tournament since the 90s. They were the favourites, with an altogether more manageable task against Croatia than France or Belgium had with each other in the second semi, but contrived to lose after going ahead.
They went on to lose the third-place play-off against the Belgians to slip off the virtual podium into fourth.
Since then — defeat to the Czechs aside — they have been consistent enough and made the inaugural Nations League finals in 2019.
Yet despite going into the finals as the highest-ranked team by Fifa, England lost in the semis against Holland before edging Switzerland on penalties to finish third.
Similarly, a third-place finish behind Belgium and Denmark in their 2020 Nations League group did little to inspire.
They did, true to form, get back in the groove when qualifiers rolled round once again with a trio of wins earlier this year against San Marino, Albania and Poland.
Southgate’s men began their pre-tournament warm-ups with a 1-0 friendly win against Austria on June 2 before beating Romania by the same scoreline on Sunday June 6. They open their Euros campaign against Croatia at Wembley on Sunday June 13 (2pm).
by Jamie Durent
“As the resident Englishman on the sportsdesk there have been a fair few quips coming my way since the groups were drawn.
“I cringe when I see some of the headlines from some English papers (the ‘Och Aye The Who?’ one in particular) in relation to Scotland and Scottish football and no doubt there will be plenty more ill-informed, disrespectful takes to come.
“As for the team itself, if Gareth Southgate goes for a 4-3-3 I would be happy. It suits the players available and allows England to maximise the talent available. But if, as I fear, he goes for a 3-4-3, England could look uncomfortable.
“This is a highly-talented squad. The forward areas are packed with talent and I hope Phil Foden is given a regular run in the team.
“Mason Mount and Luke Shaw may have played themselves into the starting line-up with strong club seasons and Marcus Rashford should get the nod over Raheem Sterling.
“I worry about the defence though. My preference would have been for Nick Pope in goal but his injury means Jordan Pickford — a Southgate favourite — will likely keep his place.
“If Harry Maguire is not fully fit then there is a shortage of top-quality defenders, which may persuade Southgate to go with three at the back. There’s also the abundance of right-backs to choose from.
“They have plenty of pace, creativity and goalscoring ability in the team but I fear the defence will hold England back.”
Goalkeepers: Dean Henderson (Manchester United), Sam Johnstone (West Brom), Jordan Pickford (Everton)
Defenders: Ben Chilwell (Chelsea), Conor Coady (Wolves), Reece James (Chelsea), Harry Maguire (Manchester United), Tyrone Mings (Aston Villa), Luke Shaw (Manchester United), John Stones (Manchester City), Kieran Trippier (Atletico Madrid), Kyle Walker (Manchester City), Ben White (Brighton and Hove Albion)
Midfielders: Jude Bellingham (Dortmund), Jordan Henderson (Liverpool), Mason Mount (Chelsea), Kalvin Phillips (Leeds United), Declan Rice (West Ham)
Forwards: Dominic Calvert-Lewin (Everton), Phil Foden (Manchester City), Jack Grealish (Aston Villa), Harry Kane (Tottenham), Marcus Rashford (Manchester United), Bukayo Saka (Arsenal), Jadon Sancho (Dortmund), Raheem Sterling (Manchester City).
Statistics referenced in this article are from Opta, Transfermarkt and Soccerway.
Already a subscriber? Sign in
© DC Thomson Co Ltd 2022. All Rights Reserved.